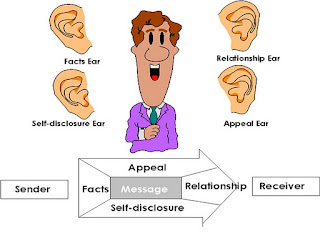 I really like the Four Ear Model of communication. This model is very effective. There are different styles and different methods adopted to communicate by people. Communication is the fundamental in influencing and persuading people. I will not go in detail in theory of communication, but definitely I would like to tell something about Four Ear model.
There are four components in 4-Ear model, these principle are based on Facts, Relationship, Self-disclosure, and appeal. If you believe on these dimensions, you need special ear to understand each dimension.
Factual Dimension: In this dimension, the message contains factual and concrete information about particular topic. Objectivity is a given when person can make himself understood by the receiver without one of the other three sides gaining the upper-hand.
Take an example of the mother asking her child to put on the sweater. She says, “Hey child, put on your sweater, it is cold outside.”  Mother is asking her child to put on the sweater. Mother is asking this because she knows the facts that there is a cold outside.
To make the communication effective, sender should think how he can communicate the factual content clearly and without misunderstanding.
Relationship Dimension: This is totally depends upon the attitude of one person towards another person. Here messages contain a statement about how one person views the other as well as about the state of their relationship. This shows itself in
a)      The chosen formulation
b)      Cadence or tone of voice,
c)      Non-verbal expressions (e.g. mimic, gestures,)
It is impossible to discuss on the facts level without in some way coming into contact on the relationship level. The relationship level dominates the facts or information level (iceberg model). If problems in the relationship sharpen, the only thing that helps is to talk about it: the information must wait until the relationship is restored.
In the same example mother has an informal relationship with child and she knows that child may not make his own decisions on her own and hence she needs to tell her/guide her. She is authoritative in his body language.
Here sender should think how he treats other people through his style of communication.
Self-Disclosure Dimension: This dimension is really is on an emotional state of mind. Here the person communicates where he discloses something about himself. This can be his conscious decision or this can be just automatics and unconsciously. In above example, mother asks her child put on sweater because she is concerned about her child. Her child may fall ill if she is not protected. Mother is really thinking about the child and here she indirectly communicates that she cares her child.
Sender should ask the question himself to make the communication effective, what he would like to disclose.
Appeal Dimension:  Here actually sender is trying to induce the receiver to do the things what sender has told. He /she expects the results here. Like mother expects that her child should put the sweater and this is a result.  A message contains not only information, but also the intention to influence the other person to do, not do, think or feel something.
There can be:
Hidden Appeal: The sender tries “softly, softly” to generate some “good weather” for his undertaking, without his competitor noticing.
Paradox Appeal:  The sender says the opposite of what he intends to achieve, since he knows that the receiver doubts his word anyway
Open Appeal: Here there is direct expression of wishes or demands. 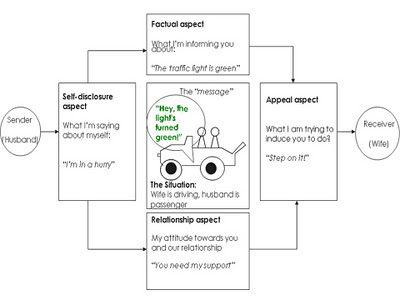 Sender should think how he induces someone to behave in a particular way due to his style of communication, without realizing it.
Let’s understand the four dimension of a message in following example.  Here wife is driving a vehicle and husband is seating besides her.
(Next week: More tips on making communication effective based on four ear model of communication)
Written & Posted by Vinod Bidwaik on Monday, December 19, 2011