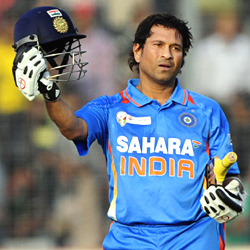 “Chase the dream, they will realized.” This is the reaction of master blaster Sachin Tendular after he scored his 100th century against . Sachin Tendular is a very positive person; I have never heard him speaking anything negative. There are lots of people in the world who dream and they succeed. There are also lots of people who also dream and never succeed. The irony is they see the dream and they don’t believe on their own dream.
Everybody has dreams regarding work, relationships, health and personal development. The million dollar question is what takes them to realize their dream. The problem is that they don’t chase their dream. They see the dream and they forget the dream. And they sigh “Kash….(perhaps…)”
Sachin Tendular saw the dream; he chased it till he realized it. Do we chase our dream? Do we consider, what takes to chase the dream? What are the secrets? The person who is strong against all the odds makes the difference. When people believe in boundaries, they become part of them. It is not only dreaming, but doing something to chase the dream. Expanding outside the boundaries is critical, but needed to be successful. Sachin was never the part of boundaries. His balls were out of the boundaries.
How dream Works
Prominent psychologists stated in most of their research that the majority of our behavior comes about unconsciously and automatically. An estimate of the proportions: 5 percent conscious, planned behavior opposite 95 percent unconscious, automatic behavior. This does not only count for “simple” automatic behavior but also for complex, intelligent proceedings.
We read automatically, we respond to e-mails and phone calls automatically, we think automatically and we even learn new automatisms automatically. You have no idea whether you stopped for red lights, gave right of way or overtook other cars. Everything happened automatically. If we conditioned our dreams in right way, they work automatically. The part of the brain does not recognize the difference between reality and dream and it assumes that dream is a reality. The mind acts accordingly.
Every action of Sachin Tendular was automatics. You just see his actions on playing ground. Many times, he went back in pavilion, with poor score. It was the natural phenomenon and any common person would have been done the same thing. He never carried the status of his image and he was always automatic and natural.
And it worked most of the time, during critical matches and when he scored 100th century.
We “condition” ourselves, as it were, to be successful. A bear in the road is no longer a disaster; it becomes a trigger to automatically produce the solutions we came up with ahead of time.
Written & Posted by Vinod Bidwaik on Friday, March 16, 2012