It's not always about power

Last week one of the former union committee members working in my one of the earlier organizations called me. We used to call him DC that time. We reconnected on Facebook, exchanged numbers and we got reconnected. He is retired now. During the discussion we discussed our old days. We recollected our memories about the organization. He was very aggressive and one of the strong members of the union. The union was affiliated to the strong political party. The central union had assigned one of the secretaries to the unit of our factory. He was an uneducated greedy chap always expecting gratification in exchange of maintaining the better industrial relations. However, as a multinational company, we had a code of conduct and it was not possible to entertain him. Good part was our workmen were cooperative though they were resistant to the changes and new practices.

During this period, I was using the framework called CCDP technique, which means Culture, Communication, Directions and Power. (I have explained the framework during one of the panel discussions. Please read the report and the framework). I had presented this framework along with actions and results the organization got in one of the conferences in 2002 and it was recognised very well.

DC was committed to the workmen’s cause. Other members used to put him in front for the confrontation. He was genuine and spontaneous but non-political. Sometimes your good character is the weakness in some circumstances. Because of his nature he was always on my radar.

During 2003, the central body was sacked by the party supremo. New body was inducted. Our local union unit also got a new secretary to coordinate. We decided to give the presentation to the central body about the organization, challenges we were facing, the resistance of workmen while implementing new initiatives etc. We also wanted to give the economic challenges, cost movement of raw material and why we need to be productive and capable. Our sourcing head, Pankaj, supported a lot to make the story convincing.

Before starting the meeting, DC stood up and asked the permission from the President and Secretary to address his grievance. I thought now, DC is going to derail the discussion.

He said, “Bidwaik Saheb, (sir) has not consulted us while making the presentation and we as a committee member are not aware about what he is going to present. Hence, we will not agree on anything, what he is presenting.”

The President of the central body just said, “Let him present. We will see later what to do with that.”
I put my points on behalf of the management. After the presentation, the president asked DC, “What is wrong in this presentation? He presented the data and facts. It is good to know the organization, the story they have. If you have better arguments let's discuss this.”

DC got upset but I was relieved by the response of the central body. It made our job easy to engage them further. However convincing DC was a major challenge. Transparency and genuine interest in the person make your job easy. I did the same. I was always open with committee members, afterall they were our employees. I was educating them about the consequences of their actions. I could implement a lot of change management initiatives afterward because of their support. 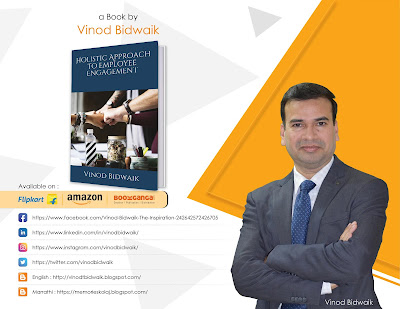 Author's book are available on Amazon, Flipkart and BookGanga
(Income from books is donated to the NGO which works for orphans, street children & abandoned elders)
Written & Posted by Vinod Bidwaik on Sunday, January 31, 2021

Nice experience sharing. Your blogs are are helping us to relate with our job and gives solutions to deal with it..