It was the year 1997. I was doing my post-graduation (Masters) in management from the institute which is affiliated to Pune University. The situation was not that good. Our batch was the second batch of the management college. Our senior batch was almost ready for placement, however there were very few companies visiting our campus. It was the era of slowdown because of Asian financial crisis. Companies were shutting down their shops. The militant left union known for their adamant attitude was making a lot of noise on the issues of wage agreement. Industries over the district in different industrial areas were struggling with top line, profitability and at other side with the non-cooperation from the union resulting in poor productivity. Few local industrialists were more much in trouble. The other union which was affiliated to the right-wing political party was blackmailing industries and few union leaders were demanding ransom from industries. Few industries were shifting to neighbouring states.

The situation was the same everywhere in the state. Few years back the government had come with the idea of establishing industrial belts in different regions. The idea was good, but the progress was slow. The infrastructure required for the industries was not that good in those delocalised regions. However few industries choose to be there to get the tax and other benefits. The new industries became the cash cows for local mafias. The environment was not that conducive for industries.

Strikes, go slow and agitations were common. This took me in 1982 where the great Bombay textile strike was called by mill workers of Mumbai under the leadership of Datta Samant. We all know the debacle of this strike. It is said that this strike was the big conspiracy against the poor mill workers by union leaders, political leaders and mill owners. This strike was spontaneous, and workers went to Mr. Samant demanded him to lead the strike, discarding established unions that time. Main demands were for more bonus and increase in wages. This strike lasted almost 19 months with the involvement of almost 0.25 million mill workers resulting in permanent closure of textile mills and pushing almost billions of people in poverty and hardship. Mr. Samant was a successful union leader dealing with employers for wage increase earlier. His militant style got popular and he established his credibility among the workmen. Because of his success, mill workers demanded him to be the leader and lead the strike. However, Samant was not ready for that. He agreed finally when workmen were too pushy and were not ready to leave his home. Very soon other leftist union supported Mr. Samant While fighting for greater pay and better conditions for the workers, Samant and his allies also sought to capitalize and establish their power on the trade union scene in Mumbai. The government got scared because if this strike would have been successful, it would have had an impact on port and dock workers and other big establishments in the region. The then congress government in state and center didn’t want the influence of Samant. We don’t know what cooked behind the scene but Samant tried to encash the situation but could not do it as Mill Owners Association and government refused to budge the pressure of union in spite of economic losses.

The situation in 1997 was different. Union had lost its glory but because of the economic conflict, few unions were trying to establish their power. Industrial relations became better compared to 1982, but the mindset shift was required.

It was the hot summer of 1996. As a part of the project assignment, we had to visit industries and work there for a few days. College had given us the recommendation letter. Contacting industries and relevant officers was an ongoing struggle. Today the world is so fast with the internet and mobile. That time, we had landlines and that’s also in a few homes. There was no other option. We had to travel to an industrial area, convince the security officer or the guard of the company and request him to allow us to speak with the relevant officer. It was like company to company marketing of your resume for the project work. Me along with my 3 friends were visiting industries daily and finally we got something.

That was my first experience to see the factory inside. It was a big electrical manufacturing company. We could enter the factory and meet the Personnel manager of the factory. He had a big cabin. He invited us inside, listened to us patiently. Finally, he allowed us to work with him on the project.

During the two months, we spent time with blue collar workmen, understanding their psyche. I also spoke with union leaders, worked with them on the shopfloor. I drafted disciplinary action letters, show cause notices, for the manager. During the span of two months, I realised one thing and that was, "missed human connection". There was a gap between white collar and blue-collar workmen. It was always “we” and “they”. Workmen were not willing to learn new things and managers were not taking them in confidence. There were separate canteens, separate washrooms, separate locker rooms. During the briefing session, I asked the question to the manager who was assigned to us as a project supervisor by the company, “It seems that we are focusing more on discipline, implementation of agreement clauses, but why don’t we focus on their skilling and reskilling, training and development and other human resource factors? Why don't we establish some mechanism to listen to them? Why don’t we establish connections without involving unions?” He laughed and replied, “It’s about the attitude from both sides, workmen and management. We can just try to bring that change. Unfortunately, both parties are not willing to do that.”

Today we have made a lot of progress in Industrial Relations. Unions are changing and they are not that extreme. There are “old school” and “new school” thoughts. One goes by the guidebook, rules and regulations, this thought is strong in managing any types of unions by any means. Another school of thought thinks about the human angle in industrial relations, understands different perspectives, challenges workmen on their purpose but equally is strong managing them in a balanced way. Both are right in their ways.

I was not aware that time what is there for me after submitting the project to the company and my professor. But yes, that day, I was clear which school of thought, I wanted to follow. 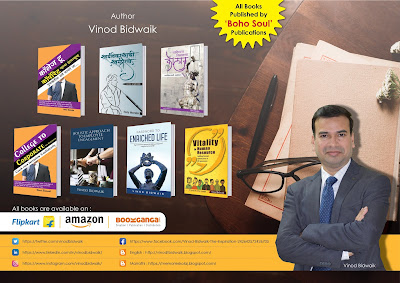 Author's book are available on Amazon, Flipkart and BookGanga
(Income from books is donated to the Janseva foundation which works for orphans, street children & abandoned elders)
Written & Posted by Vinod Bidwaik on Sunday, January 03, 2021

Very we articulated!
You have nicely explained, "We" and "They". This is real progressive IR and Collaborative relations.

This article is an eye opener for digital pace of Industrial Relations , nicely penned down the thoughts