It’s all about the ideology

It was mid-year in 1997. I had just joined the organization as a Management Trainee in the Personnel department. It was a heavy engineering company having the union affiliated to a left political outfit, militant and with illogical leadership known for disturbing the industries around. When I joined the organization, I was shortlisted for managing recruitment for diploma and engineering graduates and training them for the assembly line. Rule was simple. You hire trainee diploma engineers, train them and put them on the assembly line. You hire engineering graduates to supervise them or to work in quality control or some better job. Because of the nature of the job, the attrition in those trainees was high. So, my job was to keep filling the pipeline of those trainees. There were few lucky chaps who would get the permanent letter of the employment. Was this practice professional? I will say it depends upon the perspectives.

When I joined, I came to know that there are some issues on the machining shop floor with union. The settlement was due for a long time and the union was pushing hard on their demands. I never realised that I would be the part of the team handling the industrial dispute and participate in negotiations further with the little experience I have. We had a team who used to manage discipline and industrial issues under the leadership of the Personnel Manager.

I don’t remember the day, but one morning when I reached the factory, I saw the large gathering at the security gate. They were workmen but also the workmen who were from different industries around. They were waving red flags and shouting slogans against the few people in the management. I could not enter the gate. Somebody from the workmen noticed me. He took me to the leader. Leader asked me my name. I told my name and then he shouted the slogan against my name. I somehow escaped from there and stood at the end. After an hour, workmen dispersed, and I could get in. As I was one of the witnesses, the Personnel Manager asked me to give the statement in writing with names of workmen and details of the event. Security also submitted their report.

Next day, there was a joint meeting between management and union, but I came to know that the said meeting was inconclusive. After a few days all the workmen suddenly stopped the work and they started shouting slogans and moving around the factory. Next day the large pandal was erected outside the gate. I don’t know why but the management asked all employees to come to the factory daily, sign the muster and if possible, run the machines. This was a difficult situation for all.

And after 2-3 days the situation became chaotic. Managers were unable to go outside the factory and outsiders were unable to come in. Next day managers could escape out of the factory with the help of the police force. I came to know that the Personnel manager was fired and the Works Manager (in charge of the factory) took charge of the whole situation. Somebody from the corporate office came to Nashik. He was staying in the hotel outside but was trying to settle the situation with office bearers and external union leaders of the outfit.

Finally, the company decided to do two things. Suspend union committee members and simultaneously get the injunction for restricting to agitate them in front of the factory.

I was called by the Works Manager, he asked, “Do you think that in such circumstances, you can hire and train trainees?”

“I understand, you are asking me to leave.” I said sadly.

“Which offer sir?” Me

“Will you work with me in handling the situation which you know? You will have to support in coordinating our labour lawyer, his team, courts and of course with union office bearers. We will have corporate Employee Relations Chief with whom you will work closely”

I was not that much aware about the consequences, but I was worried about my job and the salary. For me, my job was the priority. I had no options. I agreed.

Next few days were super busy working from early morning till midnight. Drafting notices with the help of our lawyer, displaying those and appealing workmen to resume back. Once we arranged snacks for the workmen and I took the opportunity to mingle with them. I think workmen wanted to resume the work, but office bearers were adamant. I could develop a few relations as few of them were living near my home. The Assistant Labour commissioner was trying hard to bring both parties together. I was now the team member assisting Works Manager and Chief of ER who was deputed by the corporate at the factory.

Battle was on 3 level,

Psychological level: It was a mind game for management and union. While negotiating, speaking, and dealing with the union, both parties used all pressure tactics.

Social Level: It was a talk of the town with a lot of media coverage. People were speculating on who was right and who is wrong. So called social workers and political leaders started intervening and demanding the management to agree on the demand of workmen.

Legal level: Simultaneously it was also fought in the legal machinery like labour commissioner, counselling officer and for injunction etc in industrial court and civil court.

Individual level: This was a major task keeping workmen engaged and preparing them for the better and worst if something happens. They were losing their patience. Their families started calling our known officers requesting to do something about this.

After a few days, the situation became worse. Few union leaders along with outsiders entered inside the factory and started to sabotage the property. It was too much. This was the right time to act. Police again intervened. What the union was doing was totally illegal. Anyway, it was an illegal strike.

I had nine letters in my hand typed by me on the typewriter and signed by the Works Manager. I had to hand over those letters to union committee members. I was scared. In the presence of our security guards and 2 police constables, I handed over the “suspension pending enquiry” letters to union committee members. That day was stressful day. I was shaking and perhaps I would have been collapsed the way union committee behaved with me. It was mental abuse and threats to look after me outside. In the slogans, my name was also added frequently. After a few days, the company decided to declare the lock out and close the plant. Accordingly, the notice was pasted, and copies were sent to union and state authorities.

For me lock down was the good news as I could be away from this all, till we get some order from the court. Within the next 1.5 month, finally, we got the injunction in favour of the company, restricting them to agitate in front of the factory. Court clearly declared the right of running the factory. Court asked the union to resume the work immediately and settle the matter on the table. We were aware that our lock out was also illegal.

Nine union committee members were still outside, however workmen were asked to submit the good conduct bond. Everybody signed the bond except few. It was split but the majority wanted peace of mind. It was clear now that workmen abandoned the union office bearers. We helped the workmen to have the new leadership which was more amiable which also got recognition from the industrial court very fast. 15% workmen remained with the earlier union.  Settlement was signed with a win-win situation.

After a few years, I had the opportunity to visit the house of an earlier leftist union leader in connection with some social club where I was the member. His house was a four storied building. He was living with the family on the 4th floor. It was a posh home of course with elegant showpieces and rich furniture and we were served the tea in silver cups and saucers.

While taking the tea, I recalled the whole incident. Nine union committee members were on their own fighting for the reinstatement back which was not possible. Once, I saw one of them driving the rickshaw. When I waived towards him, he just saw me. I will never forget his gloomy smile.

Workmen who went behind that external leader lost their face and they never came out from the failure. Local committee members could not get the job back. Really the left ideology is strange. 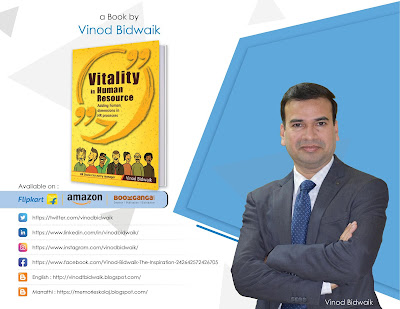 Author's book are available on Amazon, Flipkart and BookGanga
(Income from books is donated to the NGO which works for orphans, street children & abandoned elders)
Written & Posted by Vinod Bidwaik on Saturday, January 09, 2021

Very true Left ideology ruined the country by exploiting downtrodden,workers ,migrants ,minority,triable and so on by teaching them full of negativity about the establishments.

Thank you for bringing insider out prospective on such industrial unrest with more on mind. Great learning with High message to up understand less and implement more...